Arsenal legend, Kanu Nwankwo met with the club’s manager, Mikel Arteta before their Saturday midday match against money bags, Newcastle United at the Emirates which is considered to be instructive in the Gunner’s victory against the Relegation strugglers.

Bukayo Saka and Gabriel Martinell scored two second half goals as Arsenal claimed to 5th position on the log on 23 points, same as 4th placed West Ham United who plays on Sunday

Kanu, fondly called “Papilo” disclosed that he met the club’s manager before the match and offered words of encouragement to him as they battled the Magpies.

The former Super Eagles captain took to his social media accounts to reveal he met the Gunners boss before the match, while he also congratulated the team after the win.

He said: Words of Encouragement and positive vibes. Nice to meet you before this game and congratulations on the win @mikelarteta 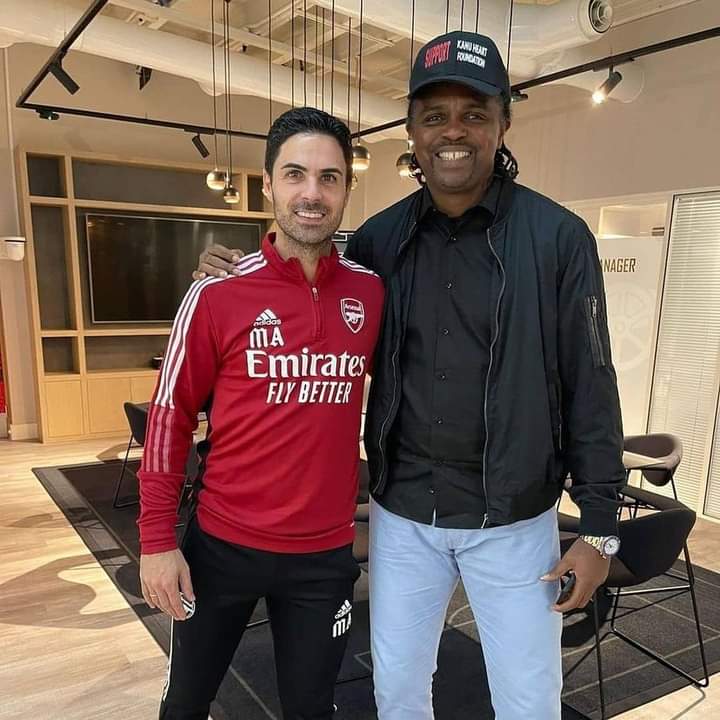 “@arsenalControl the ball and stay hungry for the win.”

The 1995 UEFA Champions League winner is a cult hero at the club, having scored 44 goals in 196 appearances.

One of his memorable matches with the Emirates side was his hat-trick against rivals Chelsea during the 1999 season. Arsenal came from a 2-0 down to snap the victory after Kanu came off the bench to net three goals as Arsenal won the match 3-2 at Stamford Bridge.

He also won two Premier League titles and two FA Cups during his time at the club.