Nigerian contingent of seven lifter and two officials of the Nigeria Weightlifting Federation, NWF will in few hours from now, depart Abuja for Uzbekistan ahead of the 2021 World Weightlifting Championship

The championship is holding in Tashkent,
Uzbekistan from 7th to 17th December, 2021.

The coaches are former lifter, Helen Asemota as well the Technical Director of the federation, Coach Chris Nwadeih.

The athletes are made up of national and continental champions including Olarinoye Adenike Adijat who won three gold medals during the 2020 Olympic qualifiers in Uzbekistan, is competing in 55kg women category. 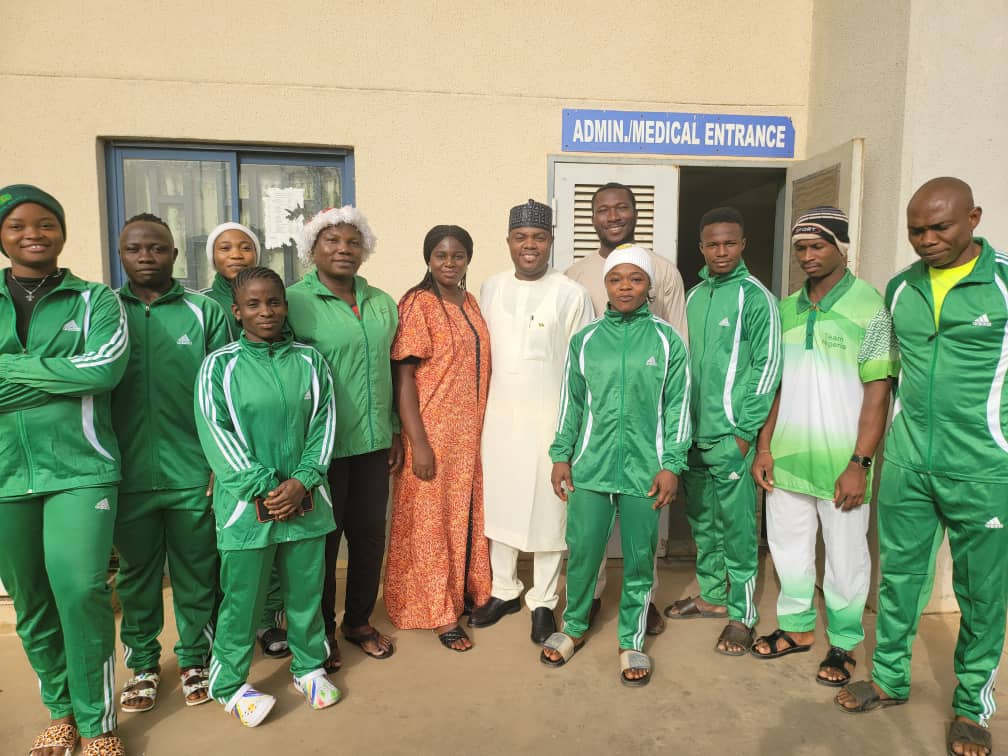 The contingent with NWF Officials at the Secretariat on Friday

In the men’s categories, are Edidiong Umoafia in 67kg and Appah Emmanuel Inemo in 61kg.

The contingent will leave the Nnamdi Azikiwe International Airport, Abuja by 10pm on Friday and will arrive Turkey’s City, Istanbul on Saturday before they will board connecting flight to Uzbekistan.

Addressing the contingents at the Federation’s Secretariat, NWF President, Dr Abdul Ibrahim commended the lifters and officials for their sacrifices during their almost two months camping in Lokoja, Kogi State.

While reiterating the support of the new board of the federation to the welfare of athletes and officials, the President charged them to compete clean, and win clean for the glory of the fatherland.

“The federation through the board ensured that you began camping early and I want to appreciate you all for your sacrifices.

“You are all primed for the challenges ahead and the board which I lead will continue to give you and every other athletes and officials of weightlifting the needed support to excel.

“You are Nigeria’s ambassadors in Uzbekistan, therefore compete clean, win clean and bring laurels back to our beloved country,” he said.