She won 1 silver and 2 bronze medals in the women’s 55kg to break 20 years record in the Championship for her motherland. Nigeria last won a medal in IWF Championship in 2001.

Adenike lifted a 203kg in total to win the medals with 1 silver medal, in the snatch event with a lift of 90kg and settled for 2 bronze medals in the Clean and Jerk with a lift of 113kg.

The African Champion went on to win Gold in the Commonwealth Championship to qualify for 2022 Commonwealth Games in Birmingham, England next year.

But her massive achievements and immense rise in weightlifting map globally does not only set her on the path for World Champion but also repositions her for greater exploits.

Her antecedents speak volume as her past records leaves no one in doubt about her potentials and capabilities. She has achieved and recorded several firsts and bests in recent times in competitions both nationally, continentally and the world over.

In the international Solidarity Championship in Uzbekistan 2020, she was awarded the best female lifter of the competition.

In the African Championship in Kenya 2021, again, she was also awarded the best Lifter of the competition

Born in Lagos State in 1999 but hailed from Osin State, the 22-year old lifter who major in 55kg women category, got her weightlifting career on the road in 2011 after she participated in the National Youth Games in Calabar, Cross River State. She announced her entrance into the snatch and jerk sport then with 3 gold medals.

She took the record further two years letter as she won 2 gold medals and a silver in the 2013 National Youth Junior, Senior Championship in Uyo, Akwa Ibom State. 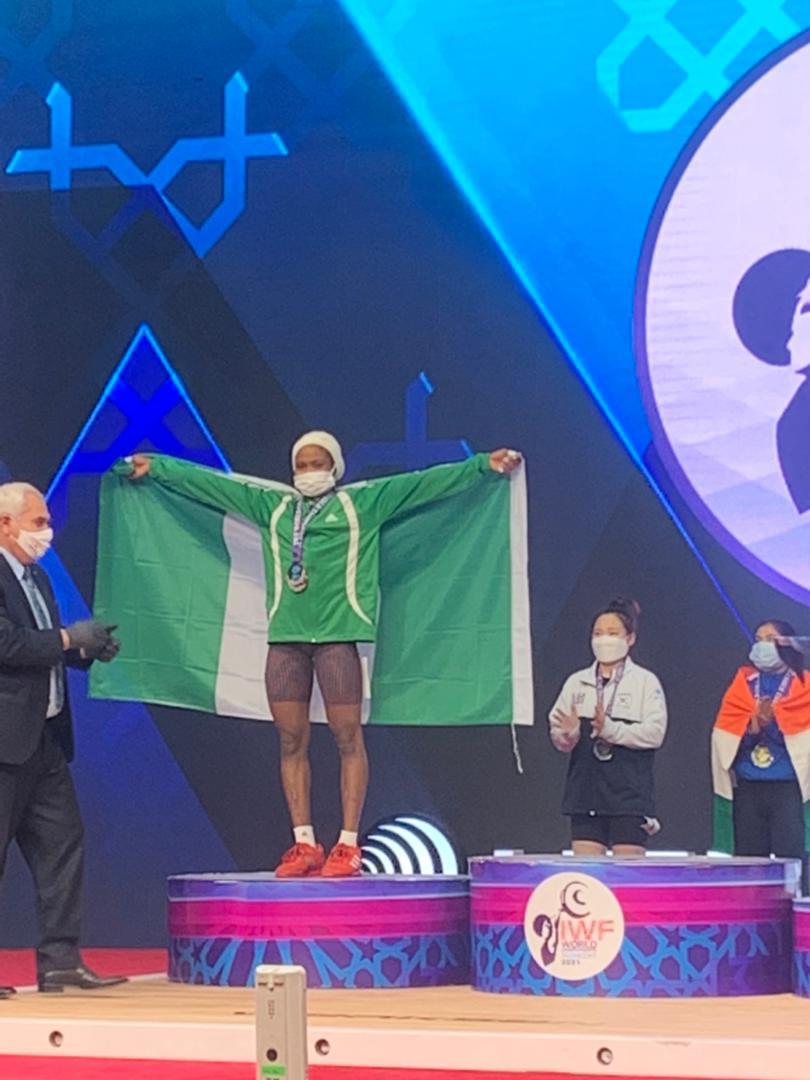 In 2018 National Sports Festival, NSF held in Abuja, she won 3 silver medals and that feat primed her for the 2019 Africa Games in Rabat, Morocco where she had a remarkable outing.

There, Adenike added two gold and a silver medals to Nigeria’s medal haul in weightlifting event to help Nigeria come second in the overall table of the Games with 127 medals in total.

Moving to global championship, young and determined Adenike kept her focus as she aimed to conquer the world. And that she achieved in 2020 International Solidarity Championship in Uzbekistan where she won 3 gold medals.

Returning back home same year, Adenike went to Edo State for the 2020 National Sports Festival and won yet again, another hat-trick of gold medals.

At the 2021 Africa Championship in Nairobi, Kenya, 22-year old Adenike maintained her rising profile by winning yet another hat-trick of gold medals in the competition.

Speaking with www.bestchoicesports.com.ng ahead of her medal-winning outing on Thursday, Olarinoye Adenike Adijat said the two months camping the lifters had in Lokoja, Kogi State prior to the championship is key to their success.

“Firstly, we had the chance to spend more time in camp and thanks to the president and his board for the great opportunity.

“I have been training and I believe God will give me grace to excel here,” she told our correspondent earlier.

And God answered her prayers as she has become the second best lifter in women’s 55kg category in the world and the best among the Commonwealth Nations.