The players and officials arrived the Abuja Airport on Saturday afternoon where they will board another flight to Gombe State to face newly promoted side, Adamawa Queens in Group B

Meanwhile the General Coordinator of the club, Mrs Sabina Chokere has advised the players to be disciplined and committed as they seek to win the trophy this season

She maintained that the management will not hesitate to sanction anyone found lacking in the discharge of his/her official duty, adding that Edo Queens has a brand which must be protected by all members of the team in any given situation. 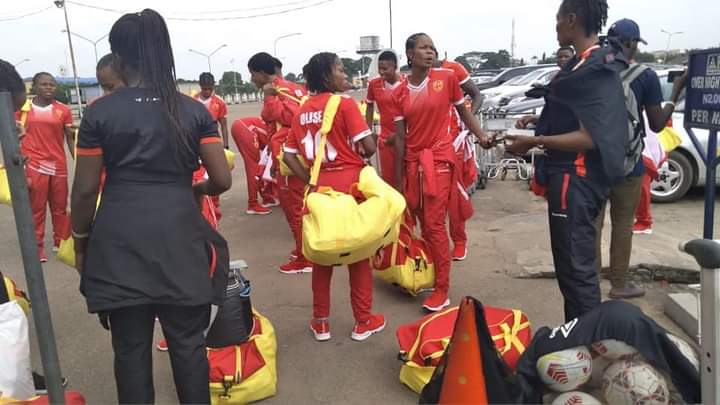 Edo Queens players at the Airport on Saturday

“I decided to call this meeting to intimate you on our decision as a family, particularly now that the Nigeria Women Football League new premiership season is commencing next week across all the designated centers in Nigeria.

“So I have deemed it necessary for us to seat and discuss the way forward. You will agree with me that we took many things for granted last season and that we are not going to tolerate anymore. If you must know, it is no longer going to be business as usual we must wake up from our slumber do that what is expected of us as a team.

“We must as a matter of fact make discipline our watchword. We are grooming women not just players because we look beyond your playing career. Definitely you will one day end the career, the next thing is for you to still be very useful beyond football. It requires discipline to be able to go to school and make mark in other spheres of life,” she said

She warned the players to always respect their coaches and the team’s officials adding the the management will not condone indecent dressing with the team.

“You must also respect your coaches and other officials at all times, we are going be very strict in the area of discipline, we won’t entertain players wearing tattered shirts, torn Jeans or carrying dreadlocks on their heads, Edo Queens is a brand and it is our collective responsibility to protect that brand.”

“It is also important to bring it to your notice that players will have their Jerseys with their names crest on it and after every match such a player is at liberty to give her Jersey out to any fan of her choice. But that depends on the commitment of the player. What that means is that you will only have names crest on your Jerseys if you make the team list for a particular match. You will be happy with your self if you play all matches which means that you will get all our Jerseys at the end of the season.

The 2021/2022 NWFL Premiership Season officially starts on the 8th of December with some big clashes.

The 12-club League is divided into Group A and B with the fixtures slated as follows:
Group A,

Group B matches will see:

All six matches are expected to kick-off simultaneously by 4pm on Wednesday.

Rivers Angels of Rivers State are the defending champions.