Following the reported sacking of Super Eagles coach, Gernot Rohr, speculations have been rife about the next coach to tinker the team, with a certain Serbian, Mladen Krstajic rumoured to be the preferred candidate by the Nigeria Football Federation, NFF.

However, veteran sports journalists in Nigeria are of different opinion, saying former Taifa Stars of Tanzania coach, Emmanuel Amunike should be given the Super Eagles job.

In an interaction that ensued on popular Federal Capital Territory Sports Writers Association platform, FCT SWAN, Richard Jideaka, a sports writer with Complete Sports newspaper, a major sports daily in Nigeria,
said it was about time a Nigerian coach is given the opportunity to handle the team.

“No to consortium of coaches but I think it’s about time we give another local coach a chance. Who knows, the local coach may just repeat what Keshi did by winning AFCON and qualifying for the World Cup,” he said.

He added that given Amunike’s vast experience in managing Tanzania national which he took to the 2019 Africa Cup of Nations after almost 40 years, he would be a square peg in square hole for the team.

“Amunike’s stints as Tanzania national team coach and Technical directorship with an Egyptian club fits the bill. He looks the most qualified Nigerian” 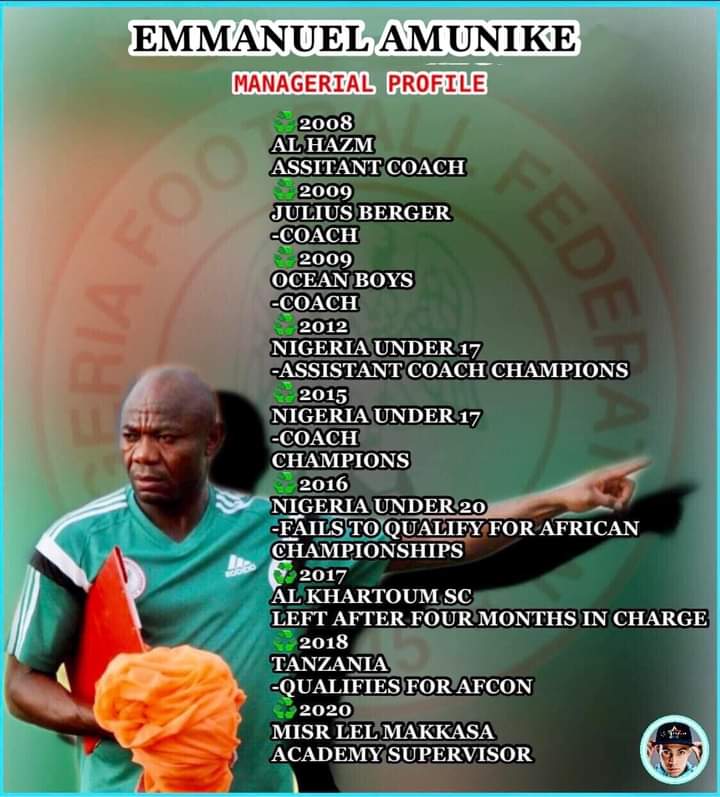 Another sports journalist, Editor and columnist, David Ngobua, who is never known to hold anything back when it comes to promote local contents stressed that “If I have my way, Emmanuel Amunike should be appointed on interim basis. My fear is the usual sentiments of Nigerian coaches. If Oliseh with all his no nonsense and international exposure couldnt rise above it, I doubt if a true Nigerian like Amunike will be above board.”

Mohammed of Brila FM Abuja said “Have you guys forgotten so soon how Amunike won the U-17 World Cup with so many challenges from the NFF?

“They had to crawl to get to the finals and win the competition. No jerseys for them, they were using hand needle to sew their torn jerseys at the competition proper.”

On his part, Ernest Osogbue, a freelancer but formerly with Federal Radio Corporation of Nigeria, FRCN said “We must start believing in our own, I think Amunike would be a good fit for the Super Eagles as currently made up. Foreign managers have not added much value to our game in recent years. They come they rip us off, and use us to go to the World Cup and then run away.

“We must use our influence to pressure the NFF to appoint Amunike, let’s give him a chance, even if he fails. We must learn to support our own,” he stated.

Nigeria football Federation, NFF submitted a technical report of the team’s performance in first phase of the World Cup qualifiers to Ministry of Youth and Sports before a decision is taken.

However, the media wave have been awash with reports of Gernot Rohr’s Sack as the Super Eagles coach, report the nation’s football governing body, the NFF had not reacted to.