Orji Uzor Kalu: ‘We Have Wasted Our Five Years In Football, Amaju Should Wake Up’

Senator Orji who stated this on Wednesday, said that the last five years under Rohr as Eagles coach have been wasted as far as football in the country is concerned.

He wondered how under Rohr the team that parade stars and talented players are struggling to qualify for Africa Cup of Nations and World Cup competitions.

“In the last five years we have wasted our time in football. There is nothing new we are doing any longer .To see a country with many professional players home and abroad struggling to qualify for the Africa Cup of Nations and World Cup is heartbreaking.”

He said Gernot Rohr is not a good coach adding that he rejected the German when he applied to be Enyimba FC of Aba coach while he, Kalu was Governor.

“Gernot Rohr is not a good coach and I don’t understand why he is still managing Super Eagles.

“When I Was Governor, he applied to become employed as Enyimba coach. He was brought to Nigeria by Oscar Udoji but I refused to employ him.

“I am calling on the Chairman of NFF, Mr Amaju Pinnick to wake up and to quickly find a replacement for Rohr,” he continued.

Kalu who under his stewardship as Abia State Governor, Enyimba International FC won back-to-back the CAF Champions League in 2003 and 2004; said Nigerians have the capacity to make themselves proud and blamed Rohr for not doing anything new with the team since 2016. 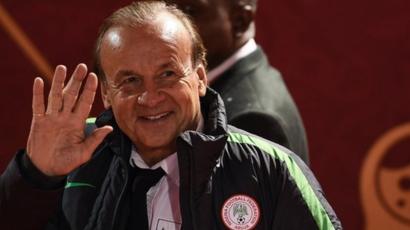 “We soccer lovers don’t need further dissatisfaction in a game, we have the capacity to make ourselves proud. If the problems you have this year are the same problems you had last year, then you are not a leader. You are rather a problem on your own that must be solved.”

Following the team’s lackluster performance against Cape Verde in the 2022 World Cup qualifier in Lagos on Tuesday, several football stakeholders have called for the sack of the German despite the team progressing into the final playoff.

Report emerged Wednesday morning that Gernot Rohr, 68, was sacked by the NFF but the spokesperson of the federation, Ademola Olajire denied the story claiming that he was not aware of the reported sack.

Super Eagles of Nigeria on Tuesday qualified for the World Cup play-off where they will likely come against Ghana, Egypt, Cameroon, DR Congo or Mali.

The play-off will hold in March next year